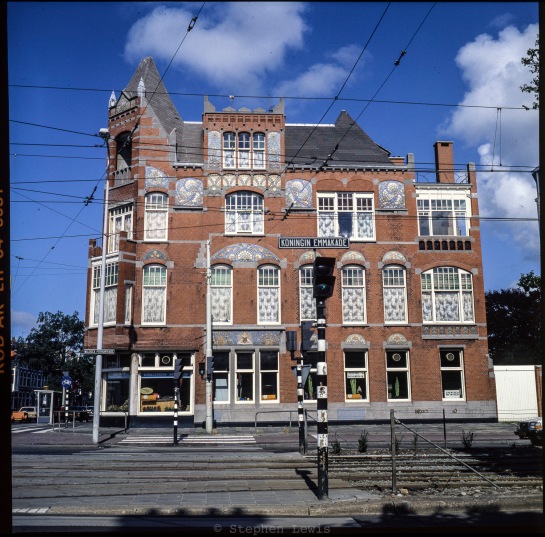 S’Gravenhage, Den Haag, The Hague: Three names for a single Dutch city, the seat of government of the Kingdom of the Netherlands, set behind the sand dunes of the North Sea coast.  I lived and worked in The Hague more decades ago than I care to admit to, and for long enough to have observed the city over the course of a generation.

The Hague stood out from its better know neighbors, Rotterdam and Amsterdam, in its seeming ordinariness.  Unlike Rotterdam, The Hague did not possess a busy deep water harbor nor exaggerated memories of hard-working stevedores, and was left relatively unscathed by bombing during World War II.  Unlike Amsterdam, The Hague was neither a commercial nor  manufacturing center, nor a center of learning, nor a wellspring of labor activism and progressiveness, and it also lacked Amsterdam’s contrived, self-promoted cachet for openness and the avant-garde.

In the years I knew it, The Hague was a city of government ministers and bureaucrats, high and low, of the military and of aged ex-colonials.  The Hague was the base of Royal Dutch Shell and its far-flung petroleum and petrochemical empire, and of the myriad engineering firms that catered to it.  It was home to a middle-class that managed its service sector and to a working class, Dutch and immigrant, that did the heavy lifting and filled repetitive entry-level jobs.

On the surface at least, The Hague was outwardly conservative, staid and quiet, its streets deserted after nightfall.  Socially and economically, The Hague was near-Byzantine in its stratification, its residents segmented and corralled according to finely-drawn class distinctions that defined one’s place and prerogatives: the neighborhood in which one lived, the accent with which one spoke, the way one dressed and combed one’s hair, and the education and work paths and prospects that were open to one or barred.

Still, The Hague had a poetry of its own.  It was a city of greenery and of parks in which the salted scent of the nearby North Sea was ever-present.  In  summer sunlight and the grayness of winter, the sky over The Hague seemed to hover low enough to touch.  The city’s eerie near-silence in off-hours revealed subtle sounds:  the occasional rhythmic slaps of shoe soles on sidewalks, the soft whoosh and rattle of bicycle  tires on rain-soaked brick-paved streets, the distant metallic grind of street-car wheels against  tracks, and the calls of ever-present seagulls.

Calvinist city to the core, The Hague was uniform in outward appearance and minimal in its decoration. Its fashions embodied a preference for a subdued, intentionally near-dowdy, elegance.  Architecturally, The Hague was a city of red brick, repetitive patterns, ornamental restraint, and subtle emblems of class — a sparseness that I’ve come to appreciate in hindsight. 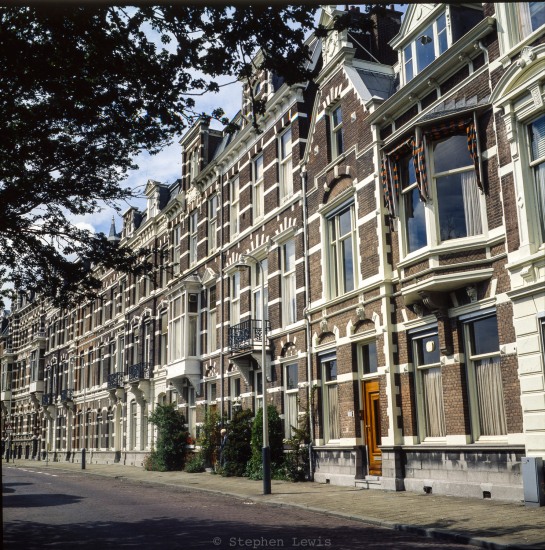 The photos above were taken in the late-1970s or early-80s on medium-format color transparency film, using a Yashica Mat 124G or a Rolleiflex Tessar f3.5 (I forget which) both of which were equipped with  fixed 75mm lenses that gave a tad more of a wide-angle view than the 80mm focal length usually considered visually “normal” in perspective for 6x6cm photographs. (Photographing architecture in 6×6 format has always been a delightful challenge, as was the requirement for absolute precision in measuring and setting exposures when using transparency film.)

The image at the very top shows how even the defining flamboyance of turn-of-the-20th-century Art Nouveau was toned down and tamed to fit the conservatism of The Hague, and rendered subordinate to the city’s traditional red brick exteriors and Neo-Baroque  gabled facades.

The second image portrays a row of late-nineteenth-century town houses built for the upper-middle-class wealth, a study in uniformity and announcement of status.  At the time the photo was taken, many of these buildings had been subdivided into single-story apartments or rooming houses.  I assume they have been gentrified and reinstated as single-family dwellings in the decades since.