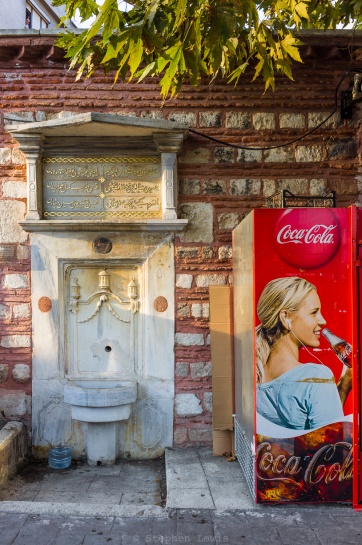 In the Kasım Paşa neighborhood of Istanbul, near to the shoreline of the Golden Horn: A simple çeşme (water fountain) flanked by a beverage dispenser so ubiquitous and  recognizable that it requires no explanation.

The pattern of the relief on the marble face of the çeşme and the columns to the left and right of the inscription above it, lead me to the very amateur guess that the çeşme dates from the late-18th century.  (The oddly perpendicular entablature appears to be a later impromptu addition or repair.) In a no less amateur way, I would date the Coca-Cola machine at the right of the image to the late-20th or early-21st century.

If memory serves me right, in one of his scores of publications, Halil İnalcık, a leading historian of the Ottoman period, famous both for his work and for having turned 100-years-old this year, once held that the provision of a comprehensive water supply and distribution system — from reservoirs to aqueducts to gravity-fed neighborhood outlets and fountains for ritual washing in the courtyards of the great Sultanic and smaller neighborhood mosques that dot Istanbul — was a defining feature of Sultan Suleiman the Lawgiver’s 16th-century project of reshaping the Ottoman capital as an “Islamic City.”

As to the development and worldwide availability and popularity of Coca-Cola: This is a long story in and of itself, best saved for treatment in a another context.