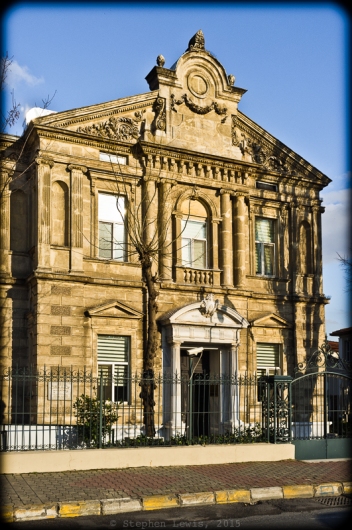 Main entrance section of the original building of Or Ahayim Hastanesi, the Balat Jewish Hospital, Balat, Istanbul, 2011. Inscriptions — both extent and obliterated — on its facade give insight into realities of past and present-day Istanbul. (Fuji X100) Click on image to enlarge.

The Or Ahayim Jewish hospital in Balat was founded and built in the last decades of the 19th century.  Its construction and original endowment was funded by large donations from wealthy Istanbul Jewish families, as well as by masses of small coins placed into collection boxes by Istanbul’s far more numerous Jewish working poor.   The monumental former entrance way as shown above, built in 1898 to replace an earlier structure, was designed by Architect Gabriel Tedeschi who, if I am correct, was also the architect of the Ashkenazic Synagogue (built as the Austro-Hungarian Synagogue) near the Galata Tower on Yüksek Kaldιrιm in the Karakoy section of Istanbul.  Today, Or Ahayim complex comprises the only buildings in Balat still standing on the shore side of the Golden Horn coastal road, on what is now a park but was once the site of a shore-front slum.

The Hebrew name “Or Ahayim” literally translates as “Light of Life” — and a true light of life the hospital has been and remains to be for Jews, Christians, and Muslims alike.  Originally founded as a dispensary for the Jewish poor, the hospital, still funded and administrated by the Jewish community of Turkey, now serves the almost completely Muslim population of Balat, a sign of the commitment of Istanbul Jews to the city in which they live and have been rooted since early-Ottoman times and, in the cases of those who can claim Romaniote origins, far longer.

In the face of realities of contemporary Istanbul, the identity and history of Or Ahayim, like those of many other “minority” institutions, seems discreetly obscured.  The “history” page of the hospital’s website never directly mentions the institution’s specifically Jewish identity but subtly suggests such by listing the characteristically Sephardic- (and, in one case, Ashkenazic-) Jewish family names of the original founders and donors, including, amongst others: Dalmediko, de Kastro, Gerson, Molho, Halfon, Levi, Kohen, and Grayver.  Some of the donors named held military titles, including one physician with the naval rank of Admiral, others held the honorific of “pasha.” My own favorite amongst the names listed is that of Yuda Levi Kebapçıoğlu — kebapçıoğlu meaning “son of the kabob vendor,” an honorific seemingly rooted in hard work and, in culinary terms, more to my own taste.  Likewise, the website mentions that the hospital housed refugees that arrived in Istanbul from Russia in the 1920s and Poland in the 1930s but similarly sidesteps any mentions of their ethnicities.

The facade of the hospital also displays a ambiguous blurring over of identity.  A very large Hebrew letter inscription in the central panel of the architrave at the apex of the structure, formerly visible from afar, was plastered over late sometime late in the last decade (according to my memory either soon after disturbances in the aftermath of the Israeli incursion into Gaza or the Mavi Marmara affair).  Vague traces of the inscription can be seen in the full sized raw file of the photo above, my reading thereof being the Hebrew words “Beit HaHolim Or Hayim” (Or Ahayim Hospital). Somewhere in my archives, I have a photo taken early in 2008 in which the inscription was still clearly legible. Oddly, a similar blurring over of the inscription is shown on the ostensibly vintage illustrations on the hospital’s website.  Two other inscriptions near ground-level, both less obvious to passersby, still proclaim the origin and  identity of the building: Over the main doorway, in Latin characters, the words “Musevi Hastanesi” (Jewish Hospital) and, on a small plaque tucked away at the lower left corner of the facade, in Hebrew characters but in Ladino (Judeo-Spanish, the former language of the Jews of Istanbul) the inscription “Ispital Or HaHayim” followed by the Gregorian date 1898 and its Hebrew calendar equivalent, 5658.

Erasure and obliteration of Hebrew inscriptions, six-pointed stars, and building construction dates according to the Jewish calendar from communal structures and residences originally built by Jews has been a feature of renovations and gentrification of quarters of Istanbul including Galata and Kuzguncuk.  Whether intentional or out of ignorance, such erasures dovetail with the present-day rejection of the past urbanity of Istanbul as well as with the reformulation of identity and history in a self-styled, and thus increasingly, homogeneous and mono-religious Turkey.