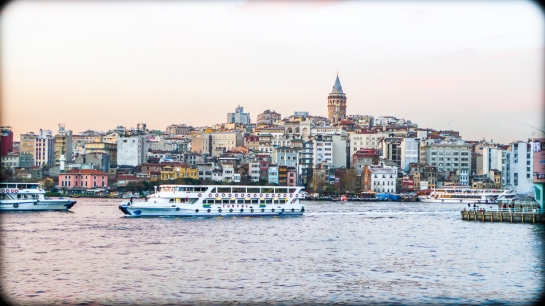 There is (or there used to be) a saying in Dutch that all that comes from afar is tastier (“Wat je veer vandaan halt is lekkerde” … or some-such).  At first hearing, this might sound clever but its implications are unfortunate.  Expecting greater satisfaction from afar can blind one to the satisfactions of all that is familiar and ready-to-hand.  The scene portrayed in the photo above was a recurring vista along my routine trajectories during frequent stays in Istanbul over the last decades.  Thus, in the spirit of the odd perspective of the Dutch saying, I neglected to photograph it with the attention it deserved.  Many times, especially at dusk, when wending my way through crowds and passing by in a rush, I made notes to myself that I should return someday with a field camera, tripod, and roll or sheet film  — reminders that I consistently ignored or postponed.

One late afternoon, however, I did happen to have a camera in my bag while walking by — a small-sensor, pocket-sized Panasonic LX3, a camera that by current standards and tastes should be retired to the shelf.  However, despite its limitations and flaws — miniscule sensor with attendant poor light sensitivity, digital noise, smearing, lack of sharpness, etc. —  on the rare occasions when I still take the LX3 with me I find it capable of surprisingly pleasing results, including the old-fashioned-picture-postcard-like “feel” of the photo above.

The photo above portrays Galata from Eminönu, just at that time of day when the sky turns orange and pink and its colors are reflected on the silvery-blue surface of currents converging at the mouth of the Golden Horn.  It shows Galata at its most monumental and most prosaic.  At the top of the rise is the Galata Tower, a gargantuan remnant — rebuilt several times over the centuries and extensively remodeled during the 1960s — of former defensive walls and originally dating to pre-Ottoman Byzantium (1389) when Galata was a self-governing Genoese trading enclave.

Juxtaposed against the tower is the thin spire of the one-time British Sailors’ Hospital (1855).  Just below and slightly to the left are the upper floors of the massive rear facade of a symmetrical dual structure originally built (1890) to house the headquarters of the Ottoman Bank and state tobacco monopoly. Designed to resemble an Ottoman-period wooden waterside mansion, the side of the building facing the Golden Horn and the hills of the old city of Istanbul on the opposite bank was conceived as counterweight of tradition to balance out the building’s self-consciously neoclassical and western-appearing street-side facade and main entrance-way.

Other buildings comprising the pointillist-like day-end physiognomy of Galata include late-19th- and early-20th-century commercial and residential structures and stark concrete structures built in the mid-20th-century on the footprints of past generations of buildings.  At the water-side level are the warren of decrepit buildings, open spaces, and narrow streets comprising the Perşembe Pazar (Thursday Market), a ships’-chandler and metal-working market that has functioned since Byzantine times but that is now under threat of proposed redevelopment into an upscale tourist and “cool” restaurant, coffeehouse, and nightspot zone — necessary “progress,” perhaps, but “progress” that erases historical continuity, legacy trades, and economic functions that are tradition passageways to socio-economic mobility.

The photo also indicates places prominent in my own subjective mapping of Istanbul.  It was on the bridge partially visible at the very far right of the photo that I was once involved in an accident that propelled me out of the world of work and income for a year but that also — despite surgery, pain, and other inconveniences — delivered me into an alternate world of reading, resting, exercising, and self-renewal.  A miniscule protrusion slightly to the right of the Galata Tower appears to be the very tip of the pillow-like, orientalist-fantasy dome of the Ashkenazic Synagogue — opened in 1900 as the synagogue of the former Austro-Hungarian Jewish community of Istanbul and designed by architect Gabriel Tadeschi, also the architect of the Or-Ahayim Hospital in Balat — a place that I have visited on-and-off over the decade since my first work assignment in Istanbul in the late-1970s.  Amongst the many worthy edifices — churches, office buildings, early apartment houses, synagogues, mosques, hans, and fountains — obscured by surrounding buildings and thus not visible in the photo is the late-19th-cenury neo-gothic Italian Synagogue, the Kal de los Frankos (Congregation of the Franks), where I enjoyed many pleasant Saturday mornings these past years and met a number of worthy friends and acquaintances . 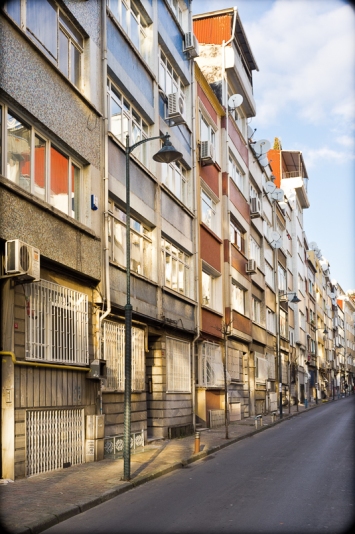 Three photos of three structures linked by geography and revealing facets of the dynamics that have shaped Istanbul: The row of apartment houses shown above stands on the crest of a ridge; the church and the construction site portrayed in the images below are set in the deep valleys that wrap around its lower reaches.

The apartment house row is located in Tatavla (present-day Kurtuluş) near the quarter of Bomonti, neighborhoods once largely Greek and still, in part, populated by Armenians and Jews.  Tatavla was  redeveloped at the turn of the nineteenth to the twentieth century when “minorities” of modest income began to move out of cramped housing in the Galata and Pera and the slopes below them and resettle in newly built dwellings in the heights beyond Taksim. The uniformly narrow frontal widths of building plots were determined by fire laws of the time in combination the economics of low cost housing.  Building facades have been refurbished over and again as the decades passed, creating a stark geometry of plasterwork and stone.  The streets are as prim and as quiet as they are treeless. 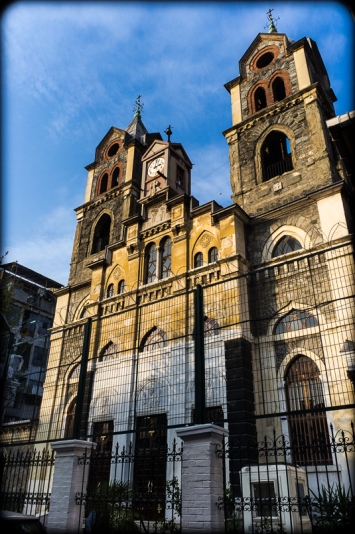 The church facade above is that of the Greek Orthodox Church of the Evangelikos (Panagia Evangelista), a huge eclectic structure combining a domed cruciform neo-Byzantine sanctuary with a neo-Gothic facade, a combination perhaps symbolic of the self-styled Byzantine roots and European aspirations  of the community that built it nearly a century and a quarter ago.  The Church of the Evangelikos stands in the valley of Dolapdere, one block from what is now a major traffic thoroughfare.  Until recently, Dolapdere Boulevard was a rough and tumble street, by day home to automobile repair shops and ateliers producing window display mannequins and by night seemingly deserted and legendarily nefarious.  Pedestrian traffic on Dolapdere is light but motor traffic is heavy and fast, and the church, half obscured by shabby storefronts fronting on the boulevard, is usually seen only in a mere flash from the windows of passing cars.

My guess is that the location of the Church of the Evangelikos was determined by two factors.  First, like many Eastern Orthodox church locations, it was built adjacent to an ayazma, a sacred natural spring.  Such streams have been holy to pagans and to Christians and to heterodox Muslims and dervishes as well, and have determined the sites of many other churches and one-time dervish monasteries throughout Istanbul.  The second locational factor may have been more mundane but no less universal — cost.  In inland parts of Istanbul, real estate prices traditionally are higher atop breezy crests and the upper reaches of slopes than in the less-well-ventilated, vista-less confines of valleys and former riverbeds .(Note: this rule is reversed at in the city’s coastal locations, where sea breezes and waterfront access and vistas have long commanded premium prices.) 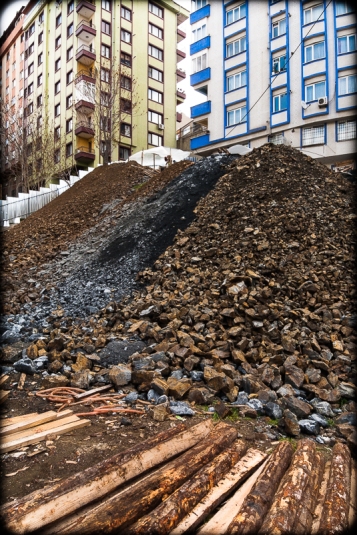 Bomonti to Piyale Paşa below

The construction site pictured in the last of the three photos links back to a story I posted a year ago reflecting on development in Istanbul and the politics and values of hillside locations and views.  At the time, the newly built middle-class dwellings in the upper reaches of the photo enjoyed views unobstructed by the shanty town below.  In the present photo (taken in 2013), the shanty-town dwellings have vanished and site preparation materials for new blocks of flatsare laid out in artful cascading swirls.  By 2014, the new flats were in place, leaving windows and balconies of the blue block shrouded in perpetual shadow, their views limited to the rear walls and windows of the newer buildings in front of them, from which they are now separated by a street of only medievally narrow width.  In urban contexts, views and vistas are ephemeral and limited in time and reach, this is even more so the more modest one’s means and apartment.