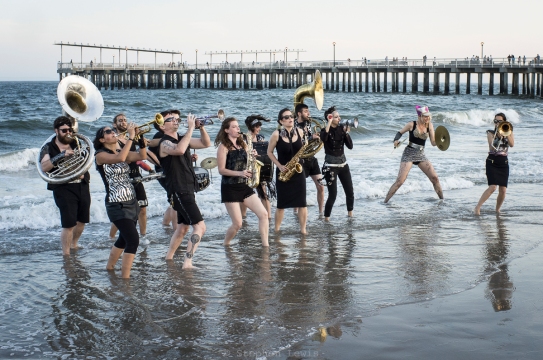 On his epic voyage homeward from Troy to Ithaca, Odysseus, the hero of Homer’s Odyssey, had his crew bind him to the mast of his ship to keep him from being lured away by the enchanting sound of the Siren’s song. The crew stuffed their own ears with beeswax, to cut out not only the music of the Siren but also their captain’s delirious orders for them to set him free.

My own mundane journeys homeward in search of traces “my” vanished (or imagined) New York include a ritual of recurring late-day walks from Brighton Beach, past Coney Island, and on to Seagate and back, sometimes over the sand but usually on the part-wood, part-concrete surface of the historic boardwalk. Unlike Odysseus and his crew, I do not fear the songs of local Sirens. I traverse my route with ears unfilled and feet unfettered. Among the rewards: A pastiche of overheard conversations in Russian, Yiddish, Spanish, Haitian Creole-French, and even English, these inter-cut with melodies and rhythms of live and recorded music: Salsa, Hip-hop, Afro-Caribbean, and mid-20th-century Soviet pop and post-Soviet Russian Rap. The music, in turn, brings with it occasional chances to join in summer-evening dance events, organized and impromptu.

A few weeks ago, a new Siren’s song led me from the boardwalk, across the windswept beach, and into the cold surf of Lower New York Bay.  What had first caught my ear was a distant Serbian-Roma brass-band sound not unlike that of Goran Bregovich that then seemed to merge with the tightly-arranged, turn-of-the-20th-century military marches of John Philip Sousa and then take on a hip-hop beat.  Turning seaward towards the source of the music, I saw the blinding glint of late-day sun rays bouncing off the polished brass bells of two Sousaphones.  There, standing in the surf, was a dozen-person-strong brass orchestra, its members attired as monochrome gladiators or, with a flight of fantasy, as Odysseus and his crew.  The name of the band: Funkrust.  I hope to hear — and see — them again. 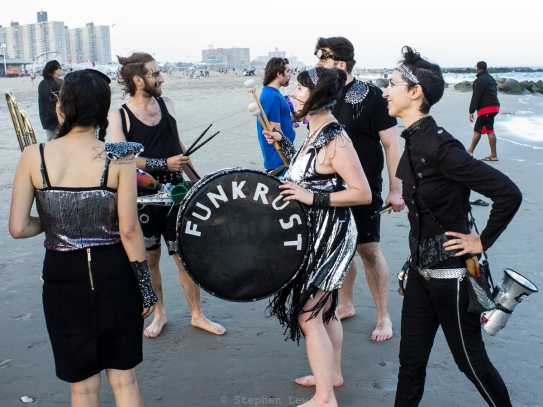 One summer, a little over twenty years ago, I took to wandering the streets of Sofia, Bulgaria late in the evenings, with a medium-format camera and a light-meter slung over one shoulder and a heavy tripod balanced on the other. At the time, I was entranced by the interplay between strong artificial streetlight and the textures of well-worn building facades and the way it registered on high-contrast black/white film pushed a stop or two beyond its rated sensitivity.

Among my favorite subjects, then as in recent years: balconies.  As I’ve mentioned in previous postings, Sofia was and still is a city of balconies: wrought iron, wooden, concrete, and plaster.  Two decades ago, however, just as today, most of Sofia’s balconies appeared empty, even on springtime and summer evenings.  Life had turned inward, so it seemed, and had yet to reemerge.  The social function of balconies as an interstice between the private and  public realms had ceased, with nobody observing public life from balconies nor conducting  their private lives in view of  neighbors or passersby.  Instead, a sharp, albeit invisible, dichotomy arose between public and private and indoors and out.

The source of this dichotomy is by no means a mystery. Factors include a rise of urban anomie in general, a search for privacy and an over-reaction against the pressures and intrusions of the public realm during the communist period, and the absence of social cohesion and trust in the time since.  The replacement of physical interaction and neighborhood connections by internet-based social networks also plays a part, as does the out-dated confusion of gated isolation with status.  For an in-depth examination, both of the history of Sofia and matters of public vs. private space in general, I recommend urbanist Sonia Hirt’s excellent book, Iron Curtains: Gates, Suburbs and Privatization of Space in the Post-socialist City, which I have been savoring chapter-by-chapter over the past year.

Two images of non-monumental structures, each with monumental tales to tell…

Both photos were taken in the late-1980s on 6×4.5cm transparency film using a light-weight, fixed-lens, wide-angle (28mm-equivalent) Fuji roll-film camera which featured manual focusing by estimation of distance and depth-of-field and a very accurate built-in manual light meter, so accurate, that when using it, I almost never bracketed exposures, not even when the camera was loaded with low-dynamic-range, transparency film. I miss the camera and I miss the 3:4 format ratio of its output.

Above: The one-time Corfu Diner on 10th Avenue and West 18th Street in lower Manhattan, a stereotypical Greek-owned, railway-car inspired diner, and a hangover from a past age when the Hudson River docks still flourished and provided work and ample venues for heavy-eating and hard-drinking to stevedores, truckers, warehouse workers, and others.  I haven’t walked down lower 10th Avenue for many years and have no idea if the Corfu Diner still stands, whether vacant or open in a new incarnation. Any updates are welcome, thus. (Note the slogan on the orange-painted truck parked to the background at the left side of the photo: “Schleppers, Moving Storage, Never a No Show.” The 1980s saw the rise of  independent non-unionized moving companies in New York.  Many, like Schleppers — Yiddish for “draggers” or “carriers” — and Moishe’s were owned by recently arrived Israelis, legal and illegal, and staffed by their compatriots, mostly young, strong, and well pumped-up for long hours of lifting and carrying with liberal rations of cocaine.  Other independent movers provided women with entree into this formerly all-male domain.  The memorable name of one of the first such  company: Mother-Truckers!)

Below: The last of several World-War-II-era US military recruiting booths (this one, if I am correct, originally built for the Navy, per its streamlined art deco take on the bridge and stack of a ship, and later transferred to the Marines) that stood on the Fordham Road overpass spanning the Grand Concourse in the Bronx.  (In the background, the Wagner Building, a 1930s office block, one of a piece with the many great art deco apartment and commercial buildings that line the Concourse from 161st St. northward).  From the early-1940s on, generations of neighborhood young people — Jews, Germans, Italians, Poles, and Irish, followed by Puerto Ricans, Dominicans, and African-Americans — volunteered at this and the other booths to fight America’s wars, just and cynical, against enemies real and invented. Some volunteered out of idealism and others for adventure, to avoid prison, or to escape into the larger world and begin life anew.  Many returned alive, be it unscathed or maimed; many others, however, had their lives cut short. 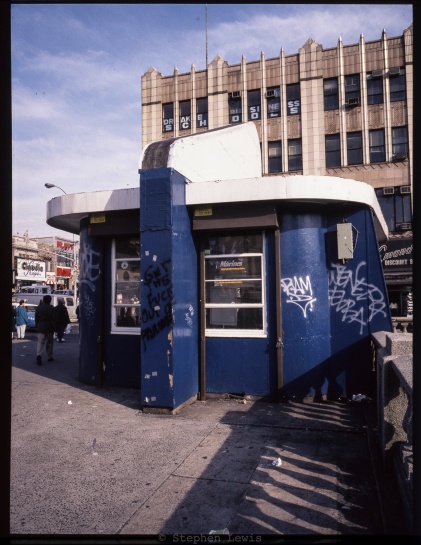 Facades of the West Bronx, a modernist entree into America and into real and illusory dreams of social mobility for hundreds of thousands fleeing the oppression and degradation of the Lower East Side more than three-quarters of a century ago. Linear design, economy (or penury?) of materials, and just enough ornamentation to break monotony and enable fantasy.  For a new generation of inhabitants arriving in the 1970s, such facades comprised the grim face of a socioeconomic ghetto in decline.  As to the future: May this neighborhood remain a place for those who fight their way up, rather than of gentrifiers who usurp and flatten through economic privilege and disposable cash.

“These seven-story apartments, arranged to form a quadrangle, are entered diagonally through a highly decorative masonry arcade that leads to a central court, the original splendors of which can only be guessed at today. Art Deco-cumMayan was then the idiosyncratic style of the Ginsbern firm.”

“One of the earliest (and best) Art Deco–inspired apartment buildings in the Bronx. Influenced both by the 1925 Exposition Internationale des Arts Décoratifs et Industriels Modernes in Paris, and motifs from Mayan architecture then fashionable. Note the elaborate polychromed terracotta ornament. The façade is Fine’s work, the body Ginsbern’s.”

For a quarter of a century, Sofia, Bulgaria has been my bench-scale urban laboratory of sorts, a city like any other but more compact and with an accelerated pace of change.  Sofia has served me as a lens through which to view dynamics of my native New York and other cities in which I spend time and  work —  cities  diverse in size, histories, and issues facing them, from sprawling, dense Istanbul to tiny, prosperous Luxembourg.

A Shift Away From the Urban Core

In the years since the 1989 collapse of the Soviet Bloc, Sofia has passed through a century’s worth of change.  Migration from villages and towns led to a near trebling of its population. In the initial decade after “the changes,” former apartments and single-car garage spaces in Sofia’s downtown became  incubators of small businesses and even smaller shops, cafes and bars  Later, enterprises that grew migrated to new, purpose-built agglomerations outside of the urban core. Simultaneously,  a new middle class moved to villas, apartment buildings, and gated “communities” at the urban periphery. Sofia’s Soviet-era high-rise concrete panel residential neighborhoods took on new life and developed their own entertainment and retail functions. Giant shopping malls sucked retail activity and pedestrian flows off of downtown streets. Motor vehicle and public transportation traffic shifted from converging on the urban core to traversing it. Amongst the results: For a number of years, Sofia’s Jugendstil- and Bauhaus-inspired downtown took on a derelict and depopulated look, becoming the seeming province of the older and the less successful by day and exuberant lower-end bar goers by night.

This summer, I’ve noticed surprising hints of change.  Downtown parks are newly landscaped and planted.  Street events generic to European and American cities — concerts, street fairs, and dance — now occur.  Tourist guides lead groups of foreigner through streets whose history they have barely begun to scratch.  And, recent political protests have had the spill-over effect of attracting  evening strollers to downtown streets.

The photo above was taken in the garden of Sofia’s  “Ivan Vazov” National Theater, following a dance event for children.  I know neither the names of the two dancers nor of their ensemble, but their smiles and confidence seem to auger well for the future tone of downtown Sofia — but, then again, in Sofia, one is never quite sure!

The ideal real estate “development”project: A sidewalk shoeshine stand on one the main streets of Kasım Paşa, the mostly religious, mostly working class quarter of Istanbul that numbers amongst its better known sons Turkey’s present prime minister, Recıp Tayip Erdoğan.  The structure comprises a minimal intrusion into public space.  Its form is dictated by its function and by the materials at hand.  The business itself is geared to the needs and flows of the pedestrians traffic that passes it.  The Romany origins of the proprietor point to a wealth of lessons about urban sustainability that remain to be learned from the past and present roles of urban Roma.  More on this in a future post …