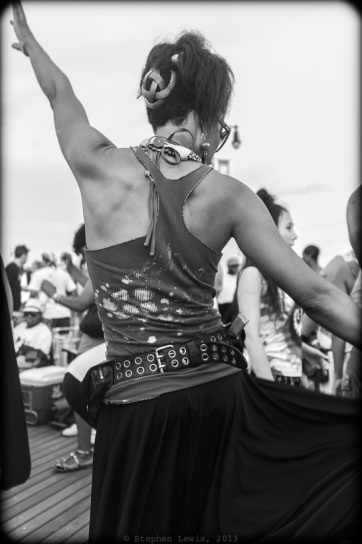 Don’t just note the dancer!  Also note the wood plank surface of the boardwalk, it will form part of the subject of an upcoming post. 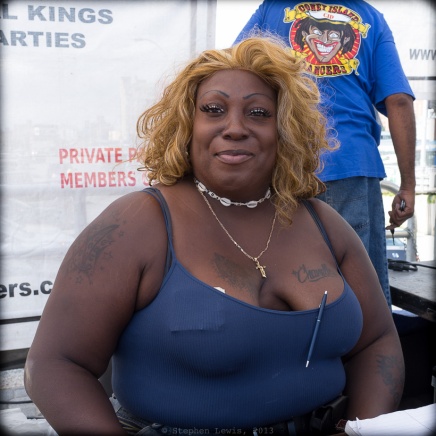 Two Coney Island boardwalk dance event denizens. In the absence of my Rolleiflex, the photos were composed and later edited to square format. 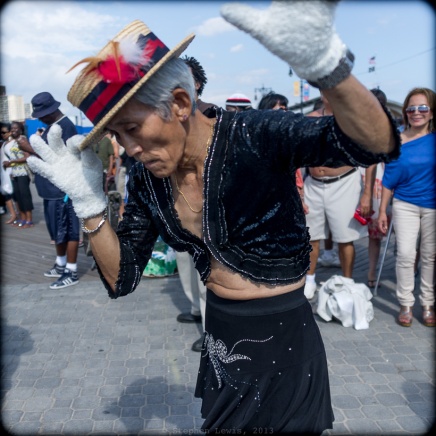 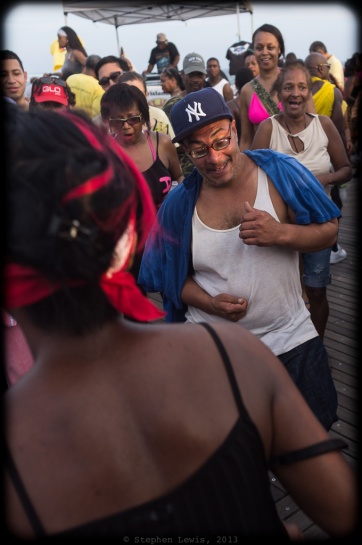 I haven’t gotten out to Coney Island this summer.  So, offhand, I don’t know the state of the famed Coney Island-Brighton Beach seaside boardwalk post-Hurricane Sandy.  What I do know is that I very much miss dancing on Coney Island boardwalk in the breeze and fading light of weekend summer afternoons.

For the last couple of decades, impromptu dances set to the blare of portable sound systems and music decks manned by proprietors and patrons of boardwalk bars attract a crowd of dancers representative of New Yorkers to whom Coney Island is the only affordable and accessible seaside respite from the thick air, stuffy apartments, and burning pavements of summer time New York.  (This despite the efforts of former mayor Giuliani to expunge such offenses against “quality of life” and of soon-to-be-former mayor Bloomberg to sanitize, gentrify, and recycle neighborhoods and public space for the benefit of those with high incomes and volumes of disposal cash.)

Most Coney Island boardwalk dancers are urban survivors, people who’ve made it through the scourges of low-paying jobs or lives at the edge.  The music is mostly Afro-Caribbean, Latin, and fusion.  The price of a ticket is no more than a lack of pretension and a desire and ability to dance.

These last years, I’d gravitated more and more towards to weekend dances on the boardwalk.  The grit of the edge of the city is more redolent of the New York that shaped me, and the boardwalk venue is far more familiar, accessible, and welcoming to me than are stylish clubs in upper income Manhattan or in the ethnically-purged, middle-American “hipster” neighborhoods that now sprawl across the north of Brooklyn. Not least, the subtle flexibility and responsiveness of the boardwalk’s wood plank surface add spring and an intoxicating feeling of (seeming) virtuosity to one’s every step. 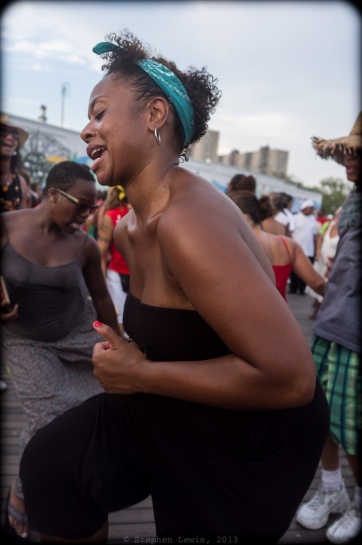 More Coney Island dancers. (Specifications as per photo above) Click to enlarge.

On the X100, the  optical imperfections (softness, flare, and color casts) of Fuji’s 28mm-equivalent screw-in wide angle adaptor helped rather than hinder portrayal of a Coney Island weekend afternoon. 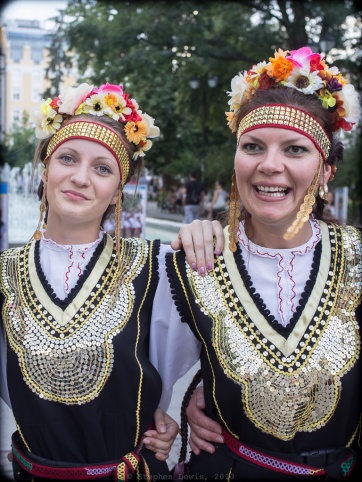 For a quarter of a century, Sofia, Bulgaria has been my bench-scale urban laboratory of sorts, a city like any other but more compact and with an accelerated pace of change.  Sofia has served me as a lens through which to view dynamics of my native New York and other cities in which I spend time and  work —  cities  diverse in size, histories, and issues facing them, from sprawling, dense Istanbul to tiny, prosperous Luxembourg.

A Shift Away From the Urban Core

In the years since the 1989 collapse of the Soviet Bloc, Sofia has passed through a century’s worth of change.  Migration from villages and towns led to a near trebling of its population. In the initial decade after “the changes,” former apartments and single-car garage spaces in Sofia’s downtown became  incubators of small businesses and even smaller shops, cafes and bars  Later, enterprises that grew migrated to new, purpose-built agglomerations outside of the urban core. Simultaneously,  a new middle class moved to villas, apartment buildings, and gated “communities” at the urban periphery. Sofia’s Soviet-era high-rise concrete panel residential neighborhoods took on new life and developed their own entertainment and retail functions. Giant shopping malls sucked retail activity and pedestrian flows off of downtown streets. Motor vehicle and public transportation traffic shifted from converging on the urban core to traversing it. Amongst the results: For a number of years, Sofia’s Jugendstil- and Bauhaus-inspired downtown took on a derelict and depopulated look, becoming the seeming province of the older and the less successful by day and exuberant lower-end bar goers by night.

This summer, I’ve noticed surprising hints of change.  Downtown parks are newly landscaped and planted.  Street events generic to European and American cities — concerts, street fairs, and dance — now occur.  Tourist guides lead groups of foreigner through streets whose history they have barely begun to scratch.  And, recent political protests have had the spill-over effect of attracting  evening strollers to downtown streets.

The photo above was taken in the garden of Sofia’s  “Ivan Vazov” National Theater, following a dance event for children.  I know neither the names of the two dancers nor of their ensemble, but their smiles and confidence seem to auger well for the future tone of downtown Sofia — but, then again, in Sofia, one is never quite sure!