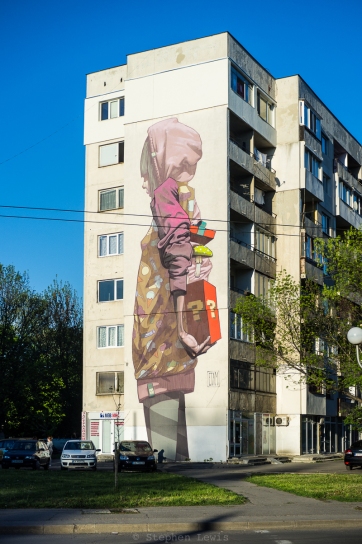 Further to a previous entry on the presence (and, to me, mystery) of a spate of apartment-building-height murals, psychedelic in style and puzzling in content, in the adjacent Sofia neighborhoods of Poduyane and Hadji Dimitar, I’ve posted a photo of a third such mural above.

I’ve selected the photo not just for its bizarreness and whimsicality nor for the issues it raises as to the ownership and aesthetics of the public realm.  Rather, a close examination of the building on which the mural is painted summarizes a full set of urban issues which I have been researching, conceptualizing, and visually portraying over the past months and into which — ideas for grant support, anyone?!? — I intend to delve further in the time to come.

Specifically, note the balconies on the right-hand face of the building, some open as per their original design and others closed-in to expand private space.  Balconies, as I hope to explain in subsequent posts, are interstices between public and private space, and Sofia is a city of balconies. How balconies are, or are not, used reveals much about the history of and changes in social and politic environments and individual responses thereto.

Also note the monochrome, but vaguely Mondriaan-like, effect on the walls of the building in the photo above, an effect more pronounced in the photo that I’ve added below. The question of why such buildings have been insulated apartment-by-apartment rather than building-by-building, and what this tells us about societies and governments, is one that I have also been examining and visually documenting of late.  Although the aesthetic effect of uncoordinated action by apartment owners on their own relieves monotony and adds color to the public realm, devolution to the individual apartment owners is the most inefficient and inequitable means of preserving public health and comfort and of cutting heat-loss through building envelops, possibly the most weighty contributor to energy consumption/inefficiency in the built environment.  Hopefully, more on this as well. 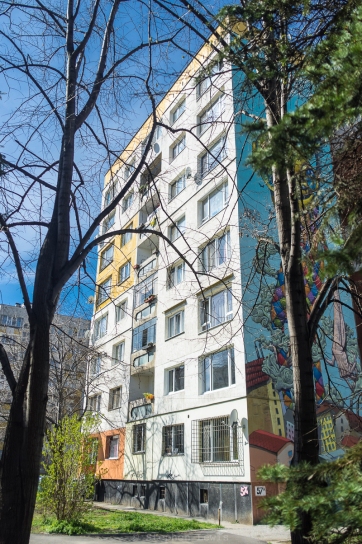 Poduyane quarter, Sofia, Bulgaria, 2016. Fuji X100 w/ +1.4 lens adaptor. The uncoordinated color schemes of private insulated apartments on the facade lends an accidental Mondriaan-like counterpoint to the neo-psychedelica of the mural on the building’s lateral face.