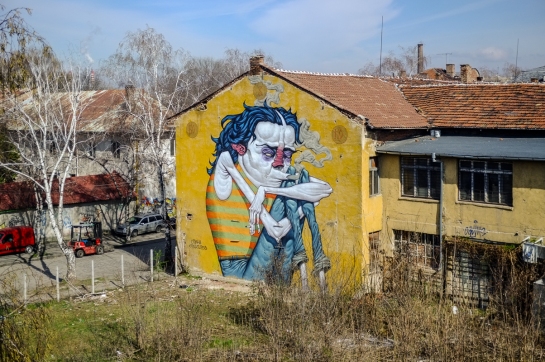 I have no nostalgia for the 1960’s. I was not a hippy. I liked jazz and R&B; indeed, white rock music seemed to work counter to my biorhythms. I was into the labor, civil rights, and antiwar movements and couldn’t comprehend psychedelica.  I looked and felt ridiculous in bell-bottomed,”hip-hugger” trousers and “love-beads,” and — alas! — I didn’t “ball” at Woodstock.  The rise of graffiti in the 1970’s also left me cold.  For many of us native to the “inner city,” the proliferation of graffiti was an added degradation and a upsetting sign of social atomization and the break-up of consensus, an aggressive imposition without consent onto the visual fields of the many by the out-sized and aggressive egos of a few, and a notice of abandonment by those outsized-ly enfranchised, economically and politically, and at a safe remove from urban grit.

Nevertheless, I smile at the murals portrayed in the photos above and below, two among several that have appeared recently in the working-class quarter of Poduyane in Sofia, Bulgaria.  The murals add a touch of brightness, whimsicality, and edge — I just hope that they were done with the participation and consent of neighborhood residents!*  Not least, the murals pose at least one iconographic improvement:  A few years ago, the only apartment-block-height “artwork” adorning building exteriors in Poduyane and the neighboring quarter of Hadji Dimitar were giant banners silk-screened with the smug, scowling face of the pint-sized leader of Ataka, Bulgaria’s  disturbingly popular antisemitic, anti-Gypsy, anti-Muslim, neo-fascist political party. Give me psychedelica any day!

* If any of you who happen upon this site know something about who did the murals and/or how they were conceived, approved, implemented, and received, please get in touch.