I’ve neglected this site since early February.  Obligations and commitments in Istanbul and the Balkans — including an enjoyable half-day tour and presentation on the historical and present-day dynamics of the city of Sofia, Bulgaria, that gave to visiting students and faculty from New York University — took up most of February and March. In April, I left for a multi-month stay in New York, a city of immense parks street-side greenery — in this respect not unlike Sofia, where, as I write, the leaves of a tall birch tree brush against my window and the scent of the thousands of blossoming linden trees that line the city’s streets and shade it’s courtyards perfumes the air. Late in March, the weather in Sofia was spring-like. New York, to the contrary, was enduring a seemingly endless cold-spell following a near-arctic winter.  Nevertheless, by May, trees and shrubbery came alive and blossoms burst forth.  The photos above, below, and linked to via the Read More button at the bottom of this entry, were taken during a late-day stroll in the Brooklyn neighborhood of Prospect Heights and a mid-day walk from Park Slope to Boerum Hill, a couple of miles to the west.  On most grounds, economic and social, I oppose the rampant gentrification that has pushed out non-white, lower-income, and gray-haired New Yorkers from swaths of northern Brooklyn.  However, when I see the revived and manicured beauty of such neighborhoods my opposition momentarily softens … that is, until I remember that, given the pace and expanse of gentrification, ordinary New Yorkers will soon be forced to live so far from the city’s lovely historic neighborhoods that they will rarely have the opportunity, time, or means to visit them. 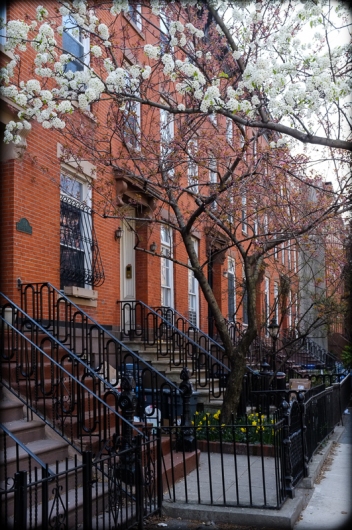 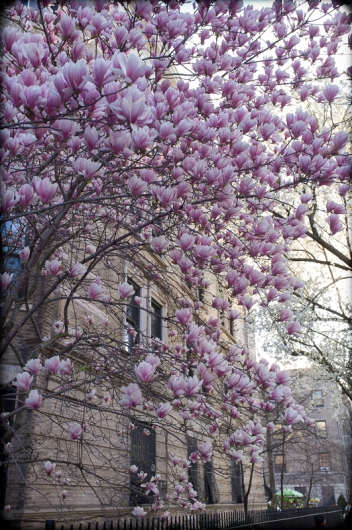