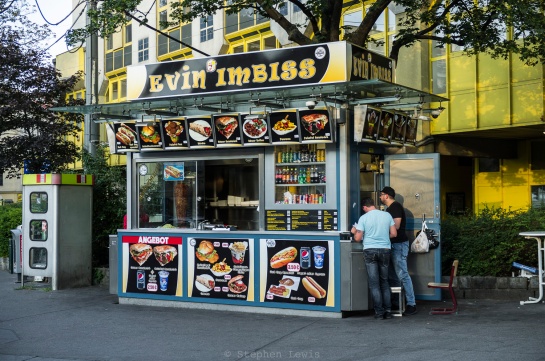 Five fast-food “boxes” in Favoriten, the 10th district of Vienna.  A (somewhat lengthy) bit of background plus a few reflections — mostly factual but partly speculative —  on the content of the photos follows the last of the four images below. 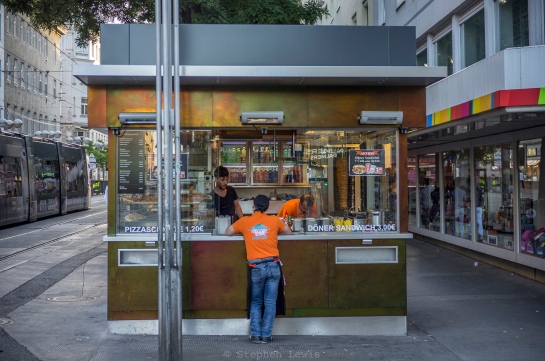 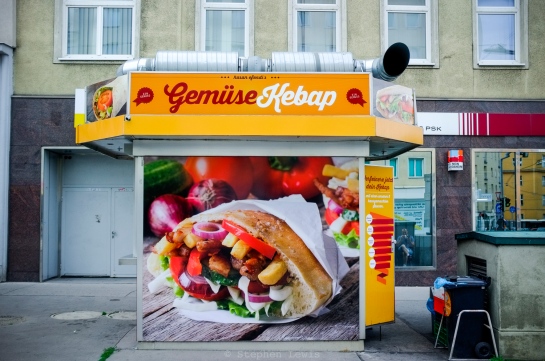 In Vienna, during the 19th-century, wandering vendors sold cooked sausages from baskets and from portable bins — low-cost fast-food for time-pressed workers, many having no cooking facilities in their rented rooms and over-crowded apartments.

By the early-20th century, wheeled sausage carts appeared on the streets Vienna. From the 1960s on, semi-permanent kiosks — würstelstände — took root on the city’s sidewalks and street corners, serving food and drink and providing places to linger and gather — cafe-restaurants, as it were, for people with the shortest of lunch breaks, the thinnest of pocketbooks, the most work-soiled hands and clothes, and the strongest of appetites.  As the decades passed, Vienna’s sidewalk würstelstände increased in size, variety, and numbers, and their menus evolved to reflect waves of demographic change.

Today, the backbone of würstelstände offerings remains “traditional” sausages, their origins grounded in the tastes of 19th-century economic migrants to Vienna from the one-time expanses of the former Austro-Hungarian Empire: Germanic white and frankfurter sausages, Polish kielbasa, Slovenian meat- and cheese-filled sausages, and paprika-laden sausages of putative Hungarian origin. In recent decades, however, such “traditional” sausages  yielded counter-space to fast-food dishes descended from the cuisine of more recent economic migrants from Anatolia, the Balkans, and the Middle East, as well as to Austrian oversimplifications of Asian cuisine.  The results have shaped new “traditions” that challenge the imagination and, more painfully, the digestive capabilities of all but the hardiest diners. Not least, the offerings, menus, and signage of the present generation of Viennese würstelstände have also brought about linguistic transformations that compromise the integrity of German, Turkish, and other languages.

Each of the five kiosks portrayed in this post expounds on this tale. All are located along a short stretch of Quellenstrasse in Favoriten, Vienna’s 10th district.  From the late-19th-century until the Second World War, Favoriten was a district of factories, brick and tile works, garden farms, and craftsman’s ateliers, and the home of people who worked in and around them.  At the start of the 20th-century, the distinctly working-class population of Favoriten comprised large numbers of descendants of emigre Bohemians and Moravians as well as other groups including more than  8,000 Jews, many originally from Hapsburg Galicia.  (Favoriten’s immense synagogue, destroyed by arson during the Kristallnacht pogrom of November, 1938, was one of Vienna’s largest and dominated the neighborhood’s skyline). By the middle of the 20th century, the district’s Bohemian and Moravian population had folded into mainstream Vienna, and the Jews of Favoriten had been segregated, terrorized, deported, and murdered by and at the behest of Nazi Germany, of which Austria formed an integral part from 1938-1945.

In the final days of World War II, a large portion of Favoriten’s industrial and housing stock was destroyed by aerial and artillery bombardment followed by house-to-house combat. A massive rebuilding program began in the 1950s. By the 1960s, an exodus of  long-time residents from Favoriten to more attractive housing estates and, eventually for some, to more upscale suburban quarters, made room for new arrivals.  The first to settle were Turkish “guest workers” followed by their families and then by subsequent waves of Anatolian immigrants.  During the decades straddling the turn of the present century, Turks were followed by Serbs, then Bosnians, and, in more recent years, by Chechens, Afghans, Iraqis, and other peoples fleeing places of conflict.

Thoughts on the stands portrayed

The signage of Evin Imbiss, portrayed in the first photo above, is a study in multi-cultural amalgamation.  Evin is Turkish for “Your House” and Imbiss a German word  for snacks and, later, for snack-bar.  A click on the photo will enlarge it, revealing a menu guaranteed to deter all but the hungriest adolescents and low-budget diners with a penchant for the tortures of culinary post-modernism. For a half-century now, newly arrived foreigners in Western Europe have been badgered and oft-times harassed to “integrate.”  In its name, offerings, and even its yellow decorative highlights (which seem to blend with the yellow of the building behind it and with the logo on the phone-both at the left of the frame), Evin Imbiss provides an apt, albeit unintended, symbol of a merger of identities.

The stand portrayed in the second photo, Würstel Box, bears a straight-forward, more Germanic, generic name: Würstel being the diminutive of Wurst and Box an anglicism for kiosk.  The regular clientele of Würstel Box, however, consists of an uninterrupted day- and night-time stream of boisterous and moderately antisocial  high-volume beer drinkers drawn from nearly as many nationalities as now populate the district.

“Kebap Essen, Probleme Vergessen” also reveals a linguistic shift made by the word  Kebap, a  phonetic spelling of kebab, a Turkish catch-all word for roasted or grilled, cubed, sliced, or ground, and sometimes skewered, meat dishes.  At Viennese street kiosks such kebabs are served in bread, Middle Eastern, Turkish, or traditionally Viennese. As a result, kebap transitioned from signifying meat dishes to meaning meat sandwiches, and then to meaning sandwiches in general. Going one step further, kebap made a third leap to mean snacks in general.  As evidence, note the sign at the far right of the photo: “Kebap Haus,” underscored by its very non-kebab menu:  Pizza, Schnitzel, Fisch, and, as an afterthought, Felafel.

The facade of the stand in the fourth photo has an elegant contemporary finish but the modestly small print of the menu stenciled on its display window mirrors the standard neighborhood fare visible in its interior: i.e. pizza and döner.

The stand in the fifth photo takes the word kebap a quantum leap further on a trajectory from its eastern and carnivore roots westward and vegetarian-wards via the somewhat contradictory offering of Gemüse Kebap, i.e. Vegetable Kebab.  Not surprisingly, the display window on the other side of the kiosk, not visible in the photo, betrayed an immense, slowly-turning, very non-vegetarian döner kebab.

All five photos were taken with with a dated and increasingly malfunctioning Fuji X100 digital camera augmented with “50mm-equivalent,” screw-on “tele” converter.  I’ve also taken a few photographs of the stands on medium format film; depending on the results, I’ll consider posting a few examples following long-overdue processing and scanning.