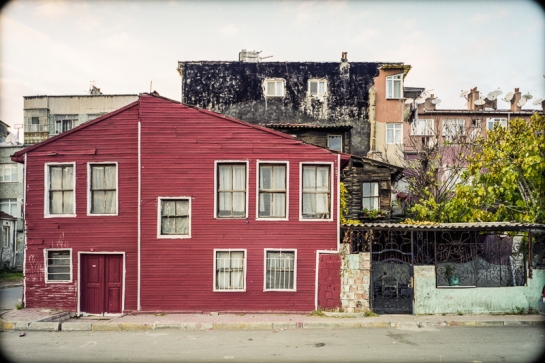 Houses and apartment blocks, wooden and concrete, at day’s end. Taken on a back street near the commuter rail tracks along the Marmara, Samatya (Psamatia) quarter, Istanbul, 2011 or 2012. Toyo field camera, 55mm Rodenstock lens, color negative roll film in a 6×9 cm. back. Click to enlarge.

Every time my strained back — and equally strained wallet — prompt me to cease photographing on film using my heavy, tripod supported, time-intensive, medium- and large-format Toyo field camera, I ultimately find cause to reverse my decision.  Last Friday, while walking through the center of Sofia, Bulgaria, I spotted a photographer busy at work behind a beautiful, Chinese-made, wood and metal large-format view camera fitted with a wide-angle Schneider lens.  Later, at my desk, I reviewed some recent scans I had made of selected negatives shot over the years with my heavy but rock-solid Toyo.  The image above struck my fancy.  It was taken in the one-time Greek and Armenian quarter of Samatya (officially re-dubbed Koca Mustafa Paşa) along the suburban railroad tracks that follow the European coast of the Sea of Marmara. The mix of well-used buildings, the rugged urban greenery, the frontal portrait-like view, the absence of people, and the late-day light struck an emotional chord that I hope resonates.