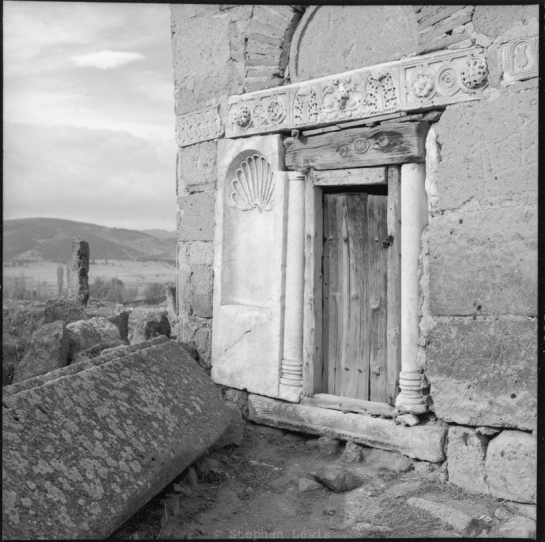 Spolia embedded in the facade of a Seljuk-era mausoleum, environs of Eskişehir, Turkey, 1997. Scan of print of b/w negative, Rolleiflex T Tessar f3.5. Click to enlarge.

Two examples of spolia, the re-use of architectural building and decorative elements outside of their original contexts.  At its most basic, appropriation and utilization of spolia provided ready sources of materials and a seeming dedication to recycling.  At a deeper level, however, use of spolia usurped and appropriated the might and worth of  rulers, donors, and civilizations who originally built the monuments from which spolia elements were taken, and imbued new structures with added significance.

Hellenistic builders appropriated spolia from ancient monuments in Egypt and the near-east, Romans did the same, Byzantium appropriated spolia from Romans, Greeks, and their predecessors. The Ottoman empire, in turn, harvested spolia from Byzantium and its predecessors.  In Istanbul, for example, free-standing obelisks and columns columns supporting the porticoes of great Sultanic mosques were taken from ancient temples and public buildings throughout the span of lands absorbed by the Ottomans.

Spolia at its most prosaic

The photos above and below portray the appropriation and application of spolia at the smallest of scales and at its most random and utilitarian.  In the image above a pastiche of non-monumental classical elements adds a bit of decorative “pizazz” to the entrance way of an otherwise sparse Seljuk-era mausoleum. ( Whether the spolia elements were emplaced during the original construction of the mausoleum or after-the-fact is beyond my competence to assess.)  In the image below, an inverted Byzantine capital is re-purposed to serve as the base for a garden-variety, hand-powered water-pump, itself re-purposed as a spout — an unintentional symbol of the triumph of the needs of small-scale basic craft over Byzantine grandeur (nb. the pump/capital ensemble is set in the courtyard of a Han designed nearly half a millennium ago by the great Ottoman architect Sinan, but occupied over the past century by the no-frills ateliers of independent metal workers).  In both cases, the utility of spolia, and maybe even a drop of pride at its display, trumps any pretense of design.

Liberation from the terror of design

Subjectively, the (non-)aesthetic of such utility and pride in the display of the the recycled resonates deeply for me.  Decades ago, I spent years living and working in the Netherlands, a country in which strict, linear, minimalist design ruled and constrained life in the public and private realms.  Building facades, both legacy and new, were characterized by uniformity of height and materials and by an absolute minimum of decoration.  In the field of graphic design, tiny type-faces and eschewal of serifs ensured that the covers and pages of Dutch publications were geometrically beautiful … but highly unreadable.  For the Dutch, so it seemed, form trumped content and, as often as not, utility as well. During my years in the Netherlands, one of the leading design practices was an Amsterdam firm, Total Design, a name tastelessly similar to “total war,” Germany’s slogan in the final years of World War II for complete commitment of resources to the ruthless and murderous pursuit of victory — an apt, albeit tasteless, metaphor for the compulsory imposition of uniform aesthetic dictates on all aspects of life.

I find the seemingly arbitrary aesthetic of spolia far more compelling.  The combination of random elements taken out of their original contexts transcends uniformity, negates original aesthetic and pragmatic dictates, generates spontaneity, and creates profound (and even humorous!) mergers, not only of materials, surfaces, and patterns, but also of times, spaces, cultures, and intents.  In short, it enables continuous rearrangement and represents a triumph of accretion and serendipity of the imposition of design. 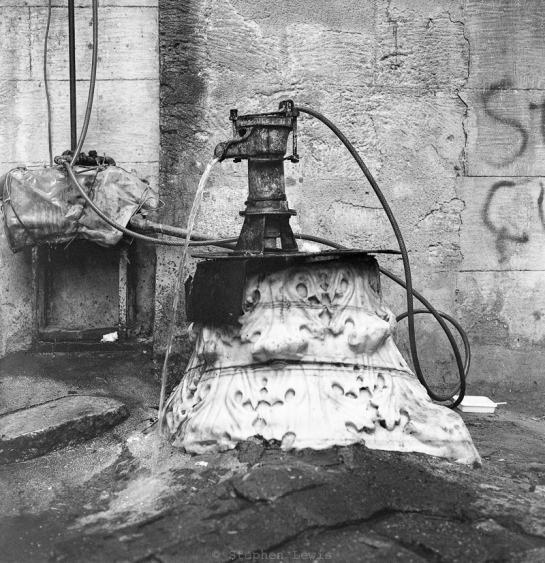