Banner illustrated with the face of poet Nazim Hikmet and two lines (“I am a walnut tree in Gülhane Park; neither you know this nor the police”) excerpted from one of his most famous poems; Gezi Park occupation, Istanbul, early June, 2013. (FujiX100) (For larger image, click on photo.)

The banner at the top bears the face of long-exiled Turkish communist poet Nazim Hikmet (b.1902, Salonica; d. 1963,Moscow).  It also contains the best-known lines from his famous poem “The Walnut Tree” (click here for full text in English-language translation), about his own experience hiding from the police amongst the walnut trees in Istanbul’s Gülhane Park.

The banner below is headed “Addicted to Pepper Gas/Gezi.”  The anarchist sign in place of the  “e” and the addition of the letter “I” puns “Gas” with “Gezi.”  Gezi Park was cleared of occupiers last Saturday night at 9:00pm by police indiscriminately firing round after round of tear gas into  crowds of peaceful occupiers and visitors, children and elderly included.  I watch scores of victims, some unconscious and some badly burned, being hand carried to a nearby hospital or conveyed by shuttling ambulances. An “addiction” overdose indeed! 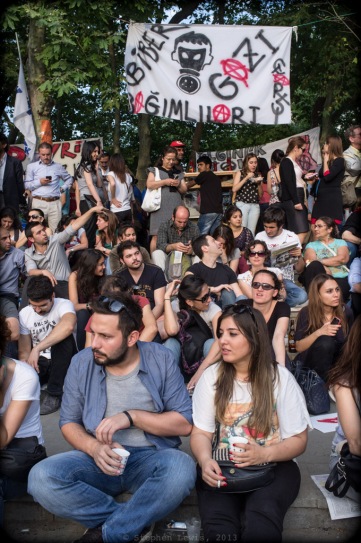