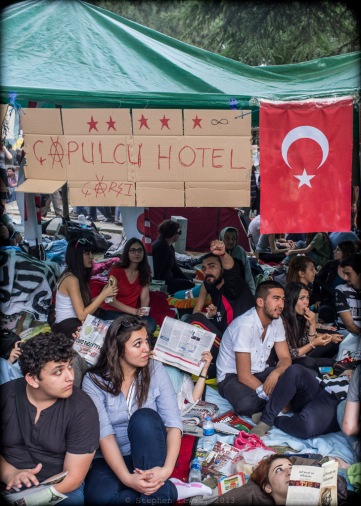 Occupiers, Gezi Square, Istanbul, two weeks ago. The word “Çapulcu” on the carton “Hotel” sign above = Terrorist/Freebooter, a phrase used by the Turkish Prime Minister to describe the occupiers and adopted by the occupiers themselves tongue-in-cheek. (FujiX100)

The Turkish Prime Minister had described the (now ex-)occupiers of Gezi Square as Looters/Freebooters, subverters of democracy engaged in immoral activities.  Many western newspapers, including the Wall Street Journal as late as this morning’s edition, described them as violent. Do they look the part?

Occupiers, Gezi Square, Istanbul, two weeks ago. If you are tempted to write them off as “mere” student protestors, keep in mind that their parents, peers, and a good part of the society supported them to the hilt. (FujiX100)