In a recent series of posts about Sofia, Bulgaria, I focused on the present-day appearances of the exteriors of Soviet-era, brutalist-style, prefabricated concrete-panel apartments block complexes built in the 1970s and 1980s, and on implications thereof re: issues of public and private space and of the nature of infrastructure.  However, Sofia is more than mere concrete.

Sofia is a paradoxical city. Over the last century-and-a-quarter its population has grown by a factor of 100, from less that 20,000 to almost two million.  It is one of Europe’s most compact and densely populated cities — a potential advantage in terms of energy efficiency and non-automotive mobility, if and when properly capitalized upon.  Not least, Sofia is also one of Europe’s greenest cities — in terms of its tree-lined streets and unusually high ration of green-space to built-space.  Expansive parks, heavily-wooded and well-manicured, anchor the north, south, east, and west cardinal points of the city. Smaller parks dot the its and a greenbelt circumscribes its periphery.

Sofia’s parks were cornerstone features of a city plan drawn-up off-site in Berlin by the Nazi German architect Adolf Müssmann during the years of Bulgaria’s venal 1930s/1940s alliance with Hitler’s Germany.  The plan, by the way, was so foreign to the nature of Sofia and so imbued with Hitler’s visions for Berlin that it alienated Sofia’s otherwise quite pro-German municipal authorities and was in large part ignored.  After World War II, dedication to park space were the only elements of Müssmann’s concept that the newly-installed Communist regime retained in Sofia’s first post-war city plan drawn up in 1948. In the decades since the fall of Communism in 1989, shady property and real estate development deals have eaten away at the edges of Sofia’s once-ample green-space.  More recently, however, the green-space that remains appears, year by year, to be better and better maintained and more fully utilized.

Pictured above and below are two of Sofia’s smaller parks.  Both are the creations of religious traditions that emerged from the late-nineteenth scramble to create, shape, and give legitimacy to a Bulgarian national identity and to create new, vernacular-language, and supposedly indigenous spiritual spaces as alternatives to the once-ubiquitous power of the Greek Orthodox Patriarchate in what is now Bulgaria.

In the photo above: The garden of the Theological Seminary of the Bulgarian Orthodox Church. The autocephalic Bulgarian church was reconstituted in 1870 by a firman (writ) of the Ottoman Sultan Abdul Hamid II, in part as a concession to Bulgarian aspirations for political, cultural, religious, and linguistic autonomy.

The clerical buildings in the background of the photo tell a story of their own.  They were designed is what is retrospectively called the “Bulgarian National Style” — actually an  eclectic amalgam of Moorish Revival, Secessionist, neo-Baroque ,Jugendstil, and supposedly neo-Byzantine elements characteristic of the work of Friedrich Grünanger, an Austrian-Hungarian architect who spent the bulk of his career in Sofia and who designed a number of the city’s iconic structures including, in addition to the Seminary, the city’s central bath house and what is now Sofia’s one remaining synagogue.

The supposedly neo-Byzantine elements that gave  facades of Grünanger’s edifices their ostensible “Bulgarian National” character are horizontal courses of glazed-tile-work meant to simulate horizontal courses of brick interspersed between and cushioning courses of stone, a structural and decorative feature that was actually a signature, not of Byzantine architecture. but of the architecture of the Ottoman Turks, the non-Christian, “foreign” tradition that the Bulgarian National Style was meant to supplant and to obliterate from memory.

Grave of a mystic …

In the photo below: The carefully tended garden surrounding the grave of the late-19th/early-20th-century Bulgarian religious syncretist and mystic visionary, Peter Deunov.  Deunov, a son of one of the first clerics of the reconstituted Bulgarian Orthodox Church, studied at a Methodist seminary in the United States but, following his return to Bulgaria did not enter the ministry.  Instead, he founded a nature-oriented spiritual movement of his own, one that remains active and vibrant to the present day.  Deunov’s journey from belief to belief was not atypical of the experimental searching for new religious and political identities characteristic of urban Bulgarians of his generation. Izgrev (tr. “The Dawn”), the suburban neighborhood surrounding the garden, was founded as a colony by Deunov and his disciples in the early decades of the twentieth century.  The Deunov garden is one of the lushest, well kept, and peaceful green spots in Sofia — this the result of the voluntarism and sense of community of those who maintain it. May it remain that way. 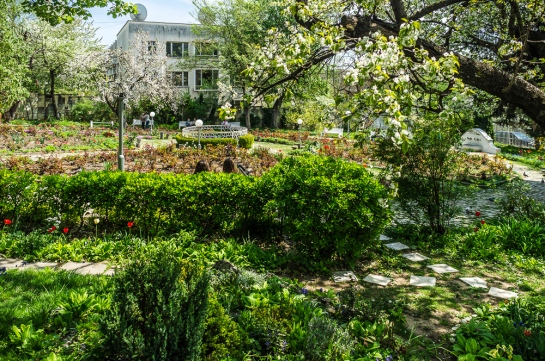